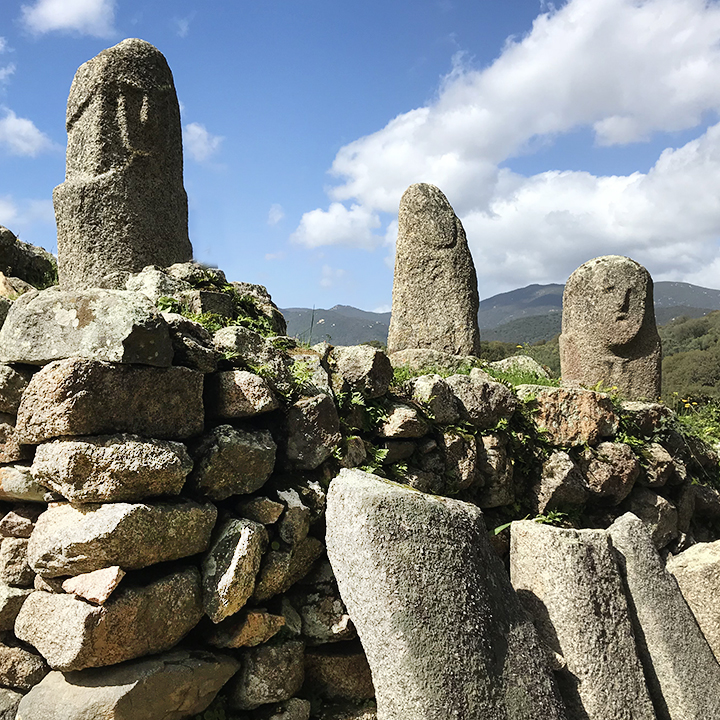 When art in France is mentioned the first thing that comes to mind is the Louvre, in Paris, and the plethora of fabulous art museums that city has to offer. Step outside Paris for art unconfined by the traditional four walls to find work that goes beyond imagination. A recent trip to the French Island of Corsica and the wine region of southern France took us on an inspirational tour of the evolution of art. We found 5000 year-old stone carvings, 13,000 year-old cave drawings and 800 year-old frescos painted on churches built into the sides of cliffs. Come along as I spotlight a few of my highlights.

The capital of Corsica is Adjaccio, birthplace of the famed Napoleon Bonaparte. Why he left this gorgeous island is a mystery to me, but as history shows, he had worlds to conquer. The backdrop of the town itself is circled by tree covered mountains, the port and citadel face the sea, on the Gulf of Ajaccio. The city has traditional art museums, bronze statues of Napoleon, beautiful fountains and wonderful history.

Just an hours drive outside of Adjaccio, along the stunning coastline road that eventually turns inland, is an area called Filitosa. This area is considered by scientists to be one of the most mysterious cultural sites in the Mediterranean. It has one of the most beautiful prehistoric collections of megalithic art in Europe. The site is said to have been occupied from the end of the Neolithic era and the beginning of the Bronze Age, until around the Roman times in Corsica. The ancient civilization that lived in this area left their mark with unique human form stone carvings called Menhirs, think “Easter Island” style figures.

The homes of our artful ancestors were built in and around large outcropping of rocks and shallow caves. Separated from the living areas are several sanctuaries adorned with the stone Menhirs. The largest one we saw was about 8 feet tall. There were also a set of five estimated to be 5000 years old still standing in a semi-circle around a 1000 year-old olive tree. It remains a mystery if these Menhirs represent gods, themselves, or their enemies. Most are carved from the soft limestone found in the area and erected thoughtfully in a planned spiritual order. They all have a simple face, some more defined than others, and usually a weapon of some sort in the front of the stone. The back of most of the stone figures have what appears to be shields or lines indicating uniforms. The place is magical and definitely worth a stop to commune with nature, ancient olive groves, and art created by our early ancestors.

NEXT UP: THE CAVE DRAWINGS OF ROUFFIGNAC

Grotte de Rouffignac is famously known as, ‘The Cave of the Hundred Mammoths’. It is located in the Dordogne Valley near Rouffignac-Saint-Cernin-de-Reillac. This extensive cave network is situated on a forested limestone plateau and has three entrances. The main entrance we used is most likely the one that was used during the Palaeolithic times. Before man inhabited this large 10km, 3-level cave it was clear bears occupied the cave and lived closest to the openings. The bears left three visible traces: vertical streaks of bear scratches on the walls, hollows for hibernation on the floors, and fossilized bones. As we went deeper into the cave, we passed wall after wall of bear scratched limestone.

The rock art of Rouffignac is 13,000 years old and hails from the Magdalenian culture. The painted and engraved drawings are distributed in most of the galleries of the upper floor, which is where visitors can go via tram. At the end of the cave is a dizzying display of drawings including woolly rhinoceroses, mammoths, horses, bison and ibex that create a prehistoric Sistine Chapel. Like Michelangelo, these would have been drawn by the Palaeolithic artists lying down, by the light of animal fat candles. With respect for art preservation and visitor limitations I was unable to take my own photos of the cave drawings, but images can be seen at Grotte de Rouffignac. I have previously written about prehistoric cave paintings in Western Europe and find it extremely important to get in touch with these ancient art forms.

LAST BUT NOT LEAST: ROCAMEDORE

Rocamadour clings to a cliff high above the river Alzou and is picture perfect. The village is an important pilgrimage destination and has been for 1000 years. Built on the site of a shrine to a Madonna, it is famous for its healing powers and has become a stop on the pilgrimage path to Santiago de Campostela. Beyond the pilgrimage, which includes the 14 stations of the cross, is the beautiful and dramatic setting of the village, that draws over 1 million visitors per year. It is a UNESCO world heritage site and is one of France’s most important tourist destinations.

For me as an artist what stood out in this village of only 600 residents was the architectural engineering and art sprinkled throughout. The back walls of all of the buildings are comprised of the exposed cliff walls they are clinging to; this architectural choice even includes the main village church. All along the route up to the top, there are statues, frescos and stunning examples of how this village brought its story to life via art. Seeing the weathered patina of the 800 year-old frescos on many of the exterior walls is awe-inspiring.

This trip, as with our previous travels, serve as a reminder that artists are an important part of relating history and time to future generations. If you are a nature lover or history buff, step outside the box of traditional museums and there is plenty of art to be discovered!

Where have you been in your travels that opened your mind about art and where it can be found?

Museum History: How Art Finds a Home
Creative Visionaries: Artists That Made a Lasting Impression
Art is Everywhere: Is Graffiti an Art to be Appreciated or Disdained?

Artist’s Block: What to do When Creativity Hits the Pause Button
Copyright © 2022 All Rights Reserved
Back To Top