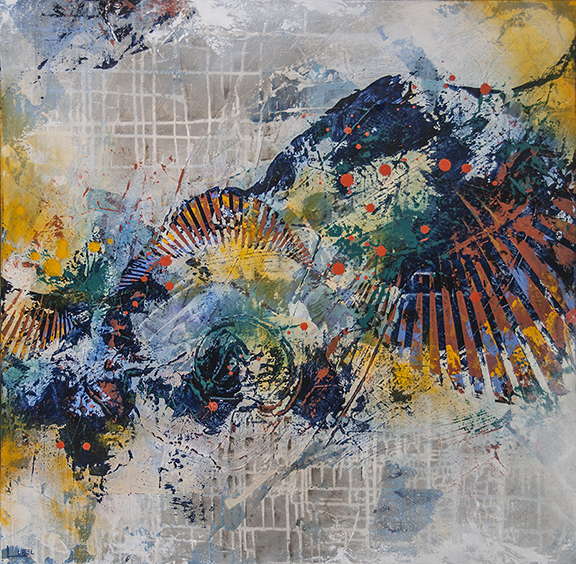 Abstract expressionism can be narrowly described as “action” painting. Gestural brush-strokes, mark making and the impression of spontaneity often characterize it. Abstract forms manifest themselves on the canvas, via the artist, in improvised and random compositions. Although I do incorporate some linear controlled markings, this “intuitive” style is closest to my work. Allow me to step through how art like this develops in my studio.

A QUICK HISTORY OF ABSTRACT EXPRESSIONISM

Abstract expressionism began as a movement in New York after World War II in the late 1940s. It was a breakaway movement from realism, which was the dominant style in American art, that transitioned into a more emotionally charged and personal style. It became the first American movement to have a significant influence on European art. The masters of the movement included American painters such as Jackson Pollock, Mark Rothko, Franz Kline, Clyfford Still and Willem de Kooning. A recent visit to the Guggenheim Museum in Bilbao, Spain gave me a first-hand look at the work of the some of these expressionistic masters.

Facing a blank canvas can be freeing for some people and daunting for others. For me, the infinite potential of a blank surface is freeing because it evokes that “clean slate” mentality. It’s exciting to think about what I’ll have by the end of the day knowing that anything done in this first stage is purely textural groundwork. A blank canvas is understandably overwhelming for others because…where in the world do you start?

I personally begin by laying several canvases in a row on a drop cloth in my garage. I have my tub of white gesso (a thick primer material) several large brushes, drywall combs, plastic spoons, tinted liquid paint and anything else I can think of that might give me an interesting texture. A thick layer of gesso is brushed on with the goal of creating streaks, splats and swirls.

Next, I walk around the set of canvases with a can held high and quickly pour streams of tinted liquid paint across all them. I finish by spontaneously swiping large dry brushes across the surface to disrupt any lines that look too contrived. This gives additional texture. I then separate the canvases, wipe the drips off the edges and let them dry.

When choosing color it’s all about how I feel that day (probably why this style is called expressionism). I dig through my tubes of paint and select a combination that I either know works or that I simply want to play with that day. Is the painting going to be light, airy and carefree or dark, rich and thoughtful? Overall, I have brightened up my palette, but I still enjoy experimenting with different color combinations.

Next comes what I call “reading” the canvas. I look at the lines and textures that are part of the background and see if there are any shapes or compositions that visually present themselves to me. The textural groundwork that I built initially helps inspire the actual painting.

I first use a coarse, almost frayed, looking brush to lay on a really loose wash of color. I make sure to keep a spray bottle close by for when I feel drips are necessary. I can either use this water to pull pigment off the canvas, or I put paint on and spray to let the color run. I utilize pallet knives and brushes to achieve the desired look, but I do tend to favor the knives. I will frequently rotate a canvas, step away, “read” the painting and come back. I sometimes work with a canvas upside-down as it progresses in order to usher it into its new direction. Layer by layer the painting pushes and pulls itself close to completion.

IS IT DONE YET?

That is the question and one that I sometimes have a hard time figuring out. There are times when you throw on that last drop of paint and just know…that’s it! Other times you have to set the canvas aside to see what, if anything, it’s asking for. Quite often it just needs to “cook” over night. When you return with fresh eyes it is possible to see it more clearly.

Is a painting ever really done or does an artist just get to a point when, like children, you must let them go? Whether it’s done or it’s just ready to be let it go is when it can be signed according to most artists. Some artists, as mentioned in this previous post think a signature detracts from the art and should not be there. I am personally an artist that believes there is a piece of the artist IN every painting so I make sure to sign everything. Once signed…it’s done!

The popularity of abstract expressionism is no surprise as it is filled with emotion, spontaneity, and movement; you can feel an artist’s mood almost jump off of the canvas at times. The process of creating a beautiful piece is sometimes as fascinating as the piece itself. What is your favorite style of art? Let me know with a comment below….

Work-Life Balance in an Artist’s World
Artist’s Block: What to do When Creativity Hits the Pause Button
FAQ: When Did You Know You Were an Artist?

Artist’s Block: What to do When Creativity Hits the Pause Button
Copyright © 2022 All Rights Reserved
Back To Top